Vegetable balls is my effort to have children eat vegetables. We have lots of green vegetables in winters so i just pick some and  made vegetable balls from them. I am also adding nutrela granules to it as it will increase protein in it. My three  year old baby boy loves them as now he wants to eat everything by his own and he will just pick up one veggie ball in his hand and will run and eat. I love the compliments from him…..Mumma yeh toh aapne bahut acha banaya hai mere liye. 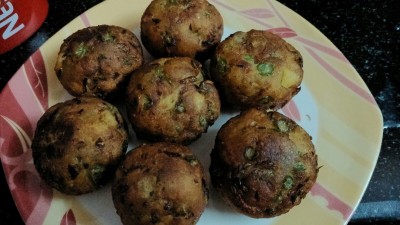 2. Add all the vegetables in it. Add all spices and mix well.

3. Soak bread slices in water for a second and add them to mixture. Mix well.

4. Now divide the mixture in equal parts and form balls from it.

5. Heat sufficient oil in a kadai. Put 2-3 ball in oil and deep fry them on medium flame till they get golden brown colour.